Another Record-Breaking Year for Ohio Breweries 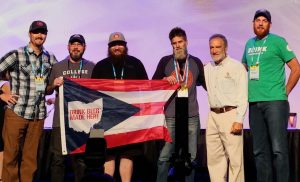 Fat Head’s Brewery led the field of Ohio entrants with three medals at the 2019 competition. Bone Head Imperial Red earned its second gold medal in the Imperial Red Ale category. Hop Stalker won its first-ever medal at GABF, a silver in Fresh Hop Beer. Up in Smoke won the bronze for Smoke Beer, the second medal for that brew after taking home a silver in the 2009 competition. Fat Head’s has now won awards in 11 straight GABF competitions, earning a total of 25 medals.

Cincinnati’s Brink Brewing became the first to win the award for Very Small Brewery of the Year in back-to-back years since the award was introduced in 2013. Brink earned the high honor by winning two gold medals in the 2019 competition. Moozie won gold for the second consecutive year in the Sweet Stout or Cream Stout category, while Hold the Reins took a third medal – a second gold – in three years. The brewery has won at least one GABF medal in each year since its founding in 2017.

Hoppin’ Frog Brewery of Akron returned to the medal stand this year with a bronze for Pentuple in the Other Belgian-style Ale category. This was their sixth total award at GABF since 2008. JAFB-Wooster Brewery and Market Garden Brewery each earned their third GABF medals, while Millersburg Brewing, Rhinegeist and Listermann Brewing of Cincinnati each won their second.

Taft’s Brewing Company of Cincinnati and Against the Grain Brewery of Louisville, Kentucky teamed up to take the silver medal in the collaboration beer category with Are You Pricklish?, a wheat ale brewed with prickly pear, kabosu and tangerine.

“Ohio breweries work so hard every day to create exceptional beers and memorable experiences in their taprooms, it’s great to see them recognized alongside the country’s best” said Mary MacDonald, executive director of the Ohio Craft Brewers Association. “A showing like this on the biggest stage in craft beer just reinforces that Ohio has emerged as a leader in the industry and a destination for world-class beer.”

Taft’s Brewing Company:
• Are You Pricklish? – Silver, Collaboration (with Against the Grain Brewing)