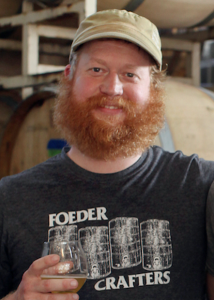 COLUMBUS, Ohio – In elections held during the first three weeks of June, the member breweries of the Ohio Craft Brewers Association (OCBA) elected six representatives to the eleven-member board of directors. Jimmy Stockwell of Little Fish Brewing in Athens – currently serving on the OCBA board – was elected vice-president. Current vice-president Lisa Wolters of Yellow Springs Brewery was not on the ballot and is stepping away from the board at the end of her term in July.

Two board vacancies were created by Stockwell’s elevation to vice-president and the departure of Urban Artifact’s Bret Kollman Baker, who is stepping down from the OCBA board to devote more time to the nascent Sour and Wild Ale Guild, to which he was elected to the board last year.

OCBA members elected Ali Hovan of HiHO Brewing Co. in Cuyahoga Falls and Garrett Hickey of Streetside Brewery in Cincinnati to fill the open board seats. The new members of the board of directors will be seated in August and serve two-year terms expiring in 2020.

“Our board defines the mission and goals of the organization, and their leadership has helped to fuel the growth of the craft brewing industry in Ohio,” said OCBA executive director Mary MacDonald. “The board represents a great cross-section of our membership, with representatives from every region of the state, large and small, new and established, packaging breweries and brewpubs. That diversity of input makes us stronger and helps us advocate for issues that affect all of Ohio’s breweries.”

Founded in 2007, the Ohio Craft Brewers Association is a nonprofit guild that exists to promote and preserve Ohio’s unified craft brewing industry. We aspire to be recognized as the industry leader at both state and national levels for preserving the art of making high-quality, unique craft beer; to serve as the unified voice for craft brewers across the state; to advocate on behalf of the Ohio craft beer industry; to contribute to systemic, local community development by driving economic and job growth, while creating experiences that bring people together; and to serve as a beacon for local production and manufacturing through craft beer, resulting in diverse choices for consumers.